“Might in the Scriptures: A Memoir of Adolph Saphir, D.D.” by Gavin Carlyle was published in 1893, and is the only published biography of Saphir to my knowledge. You may be able to find an antique copy of it on Ebay or elsewhere, and other versions of it are readily available online.

It is 475 pages long and well over a hundred years old, so unless you’re interested already in Saphir or in the issues surrounding his life and ministry, it may seem like too much for you to get through.

However, I would encourage you to take it up.

Adolph Saphir (1831-1891) is unfortunately not well known in most Christian circles today. In his day, especially in England, he was a well-known Presbyterian pastor, preacher and author. His contemporary fellow London-pastor and friend Charles Spurgeon called him “the godly Saphir,” “the Biblical student, the lover of the Word, the lover of the God of Israel.” He was also a close friend of the famed Jewish-Christian author Alfred Edersheim.

Saphir was esteemed by the Church in his day as a true man of God, a kind of modern “Apollos”—- both brilliant and eloquent, and marked by “the sacred anointing” of the Holy Spirit. His preaching was a demonstration of Lloyd-Jones’ oft-quoted phrase: “logic on fire.”

He was born-again in 1843 (along with his father) through the ministry of the Jewish Mission of the Church of Scotland (of which McCheyne was a chief leader). He served the Lord faithfully in various contexts, through several pastorates, and in a host of church/missions conference settings. This he did through much trial, through much sickness, and with a sporadic but long-term bout with anxiety and depression. We can learn much from his teachings and his life, as well as from the fruit of his ministry and the conflicts he endured. This book contains a rich selection from his teachings, books and letters, and a thorough survey of his life.

After almost 50 years of service to the Lord, in 1891, he and his wife were taken ill with influenza and bronchitis (on top of his long-term battle with typhoid fever). She died on April 1st, and he passed into eternity on April 4th, after suffering from angina-pectoris. Physicians said that he literally died of a broken heart, which highlights the deep and precious relationship that he had with his wife Sara. His last words were from the Scriptures, “God is light, and in Him is no darkness.”

Most of his books are available online either as antique copies, facsimile reprints, or in digital format in one place or another. I highly recommend reading them all. In my judgment, no man outside of the Scriptures had a better grasp of the mysteries of the faith, the glory of the Gospel, the authority and beauty of the Bible, the importance of the Church, the Person and work of Christ, and the issue of Israel as it pertains to the history of faith, and the eschatological testimony of the Biblical prophets. He had flaws as all men do, but I would argue that few men understood and proclaimed “the whole counsel of God” as he did.

I’ve been gleaning from Adolph Saphir’s books since 2001, when another Jewish believer and friend named Art Katz (1929-2007) recommended them to me. They have been a consistent source of encouragement, conviction, and biblical grounding in my life ever since.

It was a real joy finally to read in such great detail the life behind the writings/expositions, and I commend it to you. 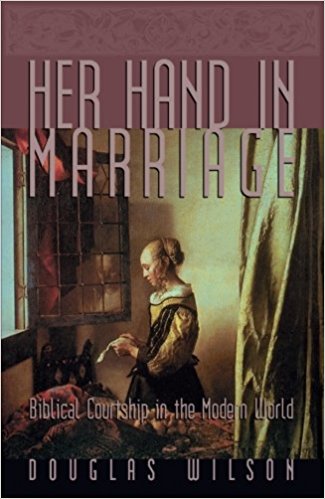 This little book by Douglas Wilson (95 pages) is a dynamite stick of practical wisdom for parents and children alike. It especially highlights the father’s responsibility and role in raising his sons to pursue a woman according to Scripture, raising his daughters to honor God with their lives, and preparing them to be grounded in terms of what kind of man they ought to be eager to enter into covenant with— and what their father’s place is in that pilgrimage.

I cannot recommend it enough. I finished it with tears. Tears of regret (wishing I had read it and put its truth into practice when my children were young), tears of joy (which resulted from newfound clarity), and tears of hope for the future of my children and grandchildren.

I don’t believe I’m exaggerating when I say that the Biblical wisdom in this book, and the helpful teaching which accompanied it, have been used of the Lord to change the way I think about fatherhood, parenting, marriage, and courtship. What a gift to the church. You should get a hold of it, and imbibe it.

This 144-page book on biblical eldership was excellent. I so appreciate the brothers at 9 Marks and the good work they’ve put their shoulders to for the sake of the Church.

This book continues that precious work. Up until now, I’ve recommended Strauch’s “Biblical Eldership” as the best book on the subject, and it’s still must reading, in my opinion. But this newer work by Rinne may have become my first recommendation. It’s readable, convicting, encouraging, and clear.

I’ve served as an elder in a few local churches for about 15 years (and read or listened to many books and teachings on eldership), and I found myself freshly convicted and helped by what’s laid out in this book. If you’re an aspiring elder, currently serving as an elder, or would like to understand eldership better as a member of your church, this book will be an invaluable resource for you.

“What the heart liketh best, the mind studieth most.”
-Richard Sibbes